Media reports are constantly telling us the Compact Disc is dead.  This may be true in some markets.  For the Classical music listener it’s still very much alive.  Artist driven labels, small independent labels, specialist distributors and a dwindling clutch of dedicated high street music shops are go to places for a range of music – from the very earliest to cutting edge contemporary – unthinkable during the days when the major record labels called the shots.  Most of this music will never find its way into concerts, hence the  cheap to produce Compact Disc is the way to hear and, more importantly, discover untold musical riches.

Recently a disc has found its way into my player that has done just that.  Its composer, Kara Karayev (1918-1982) certainly didn’t feature on my musical radar, and probably on not too many others.  Born in Azerbaijan, Karayev studied with Shostakovich, who looked upon him as one of his brightest students.  Karayev proceeded to a career that encompassed everything from children’s music to symphonies, film scores and chamber works.

Suites from two of his ballets are presented on a Naxos release – The Seven Beauties (1953) and The Path of Thunder (1958).  The Seven Beauties is based on a poem written in 1197 concerning Shah Bachram Gur and his seven wives who lived in seven pavilions.  Each is represented in the suite with music reflecting their origin that includes – Indian, Byzantine, Khorezmian and  Slavonic.  Like Czech composer Bohuslav Martinu, Karayev uses the piano, in his ballet,  as part of the orchestra and not as a solo instrument.

In The Path of Thunder, Karayev chose the controversial subject of a mixed race love affair in apartheid South Africa.  Musically Karayev uses African rhythms and instruments, of which he made an extensive study.  The highlight of Karayev’s ballet is the flatly named Scene and Duet (Track 17), which builds to a tremendous climax that will have you reaching for the repeat button.

Throughout, I kept noting influences or references to other composers.  Well, that’s great, but Karayev is very much his own composer.  His music is coloured by the world in which he lived, and has a sweeping energy that it’s impossible not to get caught up in.  It helps that the Royal Philharmonic Orchestra play absolutely magnificently under the inspired conducting of Dmitry Yablonsky.  Audio enthusiasts can be assured that  the recording, engineered by Mike Clements, in London’s Blackheath Concert Halls will give their systems quite a work-out.

Since this is a Naxos release, you can acquire this disc,  for the price of a coffee and muffin in your local coffee shop, which is probably the only way you will ever get to hear this wonderful music!

Interesting how occasionally our record labels intersect.  American label MSR Classics has just released a programme of Brahms featuring Geraldine Walther, viola and Andras Fejer, cello, who are members of the Takacs String Quartet with pianist David Korevaar.  Aside from the Trio in A minor, Op. 114, the disc includes both of the Sonatas Op. 120 for Viola, which can also be performed in versions for Clarinet.  These are late works, with Brahms inspired by the clarinet playing of Richard Muhlfeld.

German label Musicaphon have issued a recording of Sonata Op. 120, No. I in a version for Clarinet and Orchestra.  Now the Sonata appears more like a concerto.  Indeed, the orchestration sticks closely to that of the Brahms Piano Concertos.  Since its arranger is Luciano Berio (1925-2003) one might’ve expected Brahms to appear in the style of his own works.  But no, it is all very much in keeping with the music, and beautifully played by clarinettist Reiner Wehle.

What makes this Musicaphon recording unique is that Berio’s version of the Clarinet Sonata is coupled with Gustav Holst’s suite The Planets.  This is given a beautiful performance by the Lubeck Philharmonic Orchestra conducted by Roman Brogli-Sacher.  Tempi may be swifter than usual, with some orchestral detail subdued.  This – and the Brahms – is a live recording, with its SACD surround sound placing the listener firmly in the audience in Lubeck’s Musik und Kongresshalle. 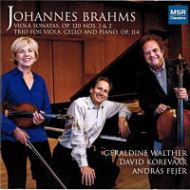 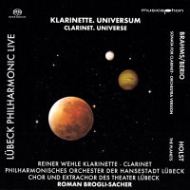 Bulgarian label Gega New are to launch a new series of historical releases under the banner of Bulgarian Musical Heritage.  A previous series concentrated on their heritage of Folk Music, this new venture will explore a rich seam of Classical music, both composers and performers.

Juliana Marinova, MD of Gega New, is particularly keen on highlighting the work of pianist Anton Dikov (1938-2004).  “He died in a car crash,” Juliana noted.  “He received many prestigious international awards and played as soloist with orchestras in St. Petersburg, Moscow, Paris, Brussels and America.  As a professor he gave master classes in many countries.”

Gega New open their series with Haydn’s String Quartet No. 1, Op. 50 and Shostakovich’s Quartets Seven and Nine played by the Sofia String Quartet on recordings made between 1989 and 1991.

Whilst this is fairly recent recording history, Juliana Marinova is keen to point up the importance of these recordings selected from the past.  “There are many recordings in the archive of Bulgarian National Radio of composers, soloists and conductors who are no longer alive, but have left a lasting trace in not only Bulgaria, but also in world culture.” 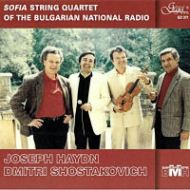 Find out the behind the scenes story of new releases on labels that are distributed by Classic Music Distribution.  We’ve recently added a lot more, and we’ll be exploring their riches in this space.